Today, at the Armory Show in New York, I saw a large print of a photograph by Jodi Bieber, a portrait of Bibi Aisha.  It is one of a series of photographs from Bieber’s Kabul Series, photographs of the women of Afghanistan. 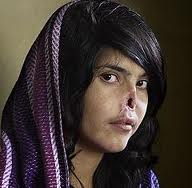 This photo of Bibi must be among the best-known images by Bieber, as it was on the cover of Time magazine on August 9, 2010.  Bibi stands, blue shawl over her head, calmly looking at the camera.  The shawl covers her ears, which were cut off, but not her nose, its bottom half cut off, leaving irregular raw edges of scarred flesh surrounding the gaping hole of her nostrils.

Despite her horrendous mutilation, this is a beautiful portrait.  Bibi’s beauty comes through because she is a beautiful woman and also because she was comfortable in Bieber’s presence.  But its essential beauty emerges because of Bibi’s self-possession and willingness to honestly show her condition. Superficially, the photo is gruesome. On a deeper and more essential level it is as noble as a portrait by Velazquez.  I couldn’t look away.

This blog entry is neither about this portrait nor about Bieber’s photography.  It is about how the portrait spoke to me and prompted certain wider thoughts.  It is about the plight of women in a male dominated world.  Bibi, at the age of twelve, was promised to a Taliban fighter. At fourteen she was married.  Abused by her husband, she fled, was caught, then taken to the mountains, mutilated and there abandoned.  She survived, and after her Time cover appeared, she was flown to California where she received reconstructive surgery.

Unfortunately, Bibi’s mistreatment is all too common, not only in Afghanistan, but throughout the world.  We hear and read about genital mutilation, women sold and held in slavery, forced prostitution, and sex tourism.  We also are aware that today, in many places, laws and traditions marginalize women and turn them into second-class citizens: they are married off with no say, sometimes as young as nine; they are denied any opportunity for education; they are prevented from owning property, thus remaining dependent upon a man (husband or son).

As Nicholas Kristof has shown, this new century of ours has seen an enormous rise in brutality towards women: acid attacks in Afghanistan, sex trafficking in south east Asia, bride burnings in India, mass rape in several African countries, and malnourishment in Ethiopia (while men in the same family enjoy perfect health). In a lecture in St. Louis in October of 2010, Kristof stated that “more girls are killed in any one decade than people were slaughtered in all genocides of the 20th century.”

Faced with these evils, we surely give thanks for being Americans, where, ever since we became a nation, we have developed far beyond such unenlightened behaviors.  After all, the beginning of the second paragraph of our Declaration of Independence holds the truth “that all men are created equal,” and today we accept as given that the word “men” is generic and means “all people”, men and women.  And then, since 1920, our 19th Amendment to the Constitution protects the voting rights of all citizens, stating that the right to vote “shall not be denied or abridged…on account of sex.”

So, America has developed into an enlightened country in which one assumes that women and men are equal. But how far have we Americans actually come? Could it be that, lately, we are reverting?  To be more blunt, are Republicans and our country’s right wing pushing us backwards by creating a culture of gender disdain and dismissal?

Allow me to cite a few examples that raise such suspicions.  There are people who would like to disenfranchise women, such as conservative commentator Ann Coulter.  In 2003, she stated that America “would be a much better country if women did not vote.”  In case someone defends her as having “misspoken,” in 2007 she said “If we took away women’s right to vote, we’d never have to worry about another Democrat [sic]president….women are voting so stupidly, at least single women.”  So much for the 19th Amendment as one of the bedrocks of our modern society;  Ann Coulter thinks (some) women are not smart enough to vote and ought to be treated as second class citizens.

Another example, of course, is the continuing abortion debate.  Republicans nationwide appear obsessed with revoking a woman’s right to choose even though they claim their main interest right now is balancing the budget.  Georgia State Representative Bobby Franklin wants abortions classified as murder and all miscarriages investigated, which would require a force of “Uterus Police” larger than our National Guard.  Maybe we could get in the good graces with the Taliban by sending our “Uterus Police” there instead of our National Guard, and they could expand their duties to providing virginity tests for all the brides in Afghanistan and rural areas of other countries like India where this medieval custom is still practiced!

Of course, you may say, this is Georgia and hardly representative of our country as a whole.  However, just over a week ago, House Republicans voted unanimously to strip Planned Parenthood, our nation’s leading provider of reproductive health care, of all government funding.  None of this government money had been used for abortion; all of it goes to family planning, cancer screening, and other essential aspects of reproductive health care.  Yet, Republicans only talked about abortion, as if to mask the fact that they were actually proposing to jeopardize the health of American women.  Republicans also are against Title X, the National Family Planning Program; since Title X provides essential contraception for the poor, one would think that anyone against abortion would embrace Title X.  Not according to today’s Republican logic!

The House has just chopped $50 million from the Maternal and Child Health Block Grant, which helps some 2.5 million women and 31 million special needs children.  It imposed $1 billion cut in programs at the National Institutes of Health that aim to prevent pre-term birth. It cut nearly $1 billion from the Centers for Disease Control and Prevention.  Helping women is clearly low in priority among Republicans, and that even shows in another backward trend: for the first time in 30 years, the number of women in both houses of Congress has diminished.

Stephanie Schriock, President of Emily’s List, talks of the “radical anti-woman agenda put forward by John Boehner and House Republicans.”  “The GOP is doing everything it can,” she writes,  “to take away our access to health care, our ability to plan and care for a family, and our opportunities to make successful, safe, and healthy lives for ourselves and our families.”

With women now making up only 17% of Congress, Schriock writes, and with Republicans now in control of the House, “Republican men will forgo their promises to create jobs and will instead attack the programs American women rely on to take care of themselves and their families.”

Undoubtedly, some of our more conservative Republicans hold to the quaint concept that a woman’s place is in the home.  Ironically, the home that they are offering our women is becoming a most unwelcome place.  Are they, maybe, cutting off their (her) nose to spite their face?