In many cultures, we encounter legends in which the people of a town or kingdom are threatened by a dragon (or some other form of malevolent, supernatural being). In order for them to survive, these people must appease the dragon, often first feeding it sheep and goats, but soon more precious sacrifices–their own children. 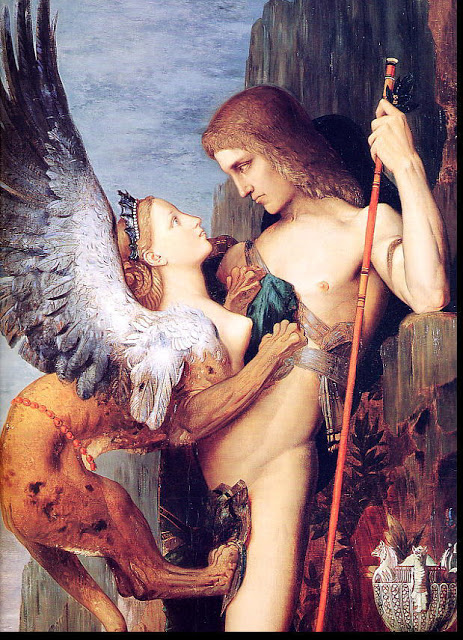 Most of us know something about the “Sphinx of Thebes,” lion-bodied with head and breasts of a woman and wings of an eagle, who preyed on the youth of the land until Oedipus solved her riddle.

And then there is the legend of “St. George and the Dragon” as told in the Golden Legend, in which George rescues the town of Silene (and the king’s daughter, who had become the latest sacrificial victim) by standing up to, wounding, and later slaying the dragon. 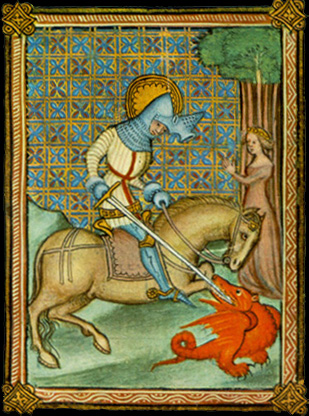 Now, whatever the reality behind these legends, we certainly must wonder why the town would sacrifice its youth to appease an insatiable superhuman force.  The youth of a community is its future, and one must never sacrifice one’s future for limited gains and personal survival in the present. Placing another child in front of the dragon’s lair is an insane, short-term solution. A community thrives only when focused on long-term gains in which education and social programs bring wealth to all.

Could Silene not have found other solutions to countering the dragon?  Had all of its citizens joined forces in coordinated and communal action, and not necessarily to slay the dragon, could they not possibly have penned it in or otherwise harnessed its power to serve the entire community–what today we might want to call true bipartisanship?

And if legends embody some truth of a far-distant past, so too, past legends that have come down to us may help us to give meaning to our present. Today, our corporations have become a version of the dragon of Silene. As is the dragon–reptilian, supernatural, and insatiable, always demanding more–so our corporations are superhuman, insatiable and only interested in short-term gains (their share prices). 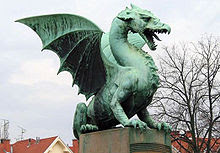 Republican lawmakers have become the accommodating citizens of Silene, sacrificing their children’s education, healthcare, and worker’s rights to appease a force that already has too much, always will want more, and has no loyalty to the community, the state or the nation–these corporations are now, more than ever before, the threat that Eisenhower termed the “Military-Industrial Complex.”

Thus today, in state after state–especially those with Republican governors–we are suffering legislative attacks on workers, the poor, and the middle-class while new benefits and tax cuts are being given to large corporations and the rich. These examples of the Right feeding the Rich are like some legend from the past, too gruesome and inhuman to be true….

….Yet, if we open our eyes, we see taking place right before us the sacrificing of our nation and its future to the corporate dragon.


Here, listed alphabetically, state-by-state, are thirteen examples of how this sacrifice is taking place before our very eyes!


Arizona: Corporate tax cuts will cost the state $538 million.
As a way to make up the difference, Governor Jan Brewer proposes cutting health care for 280,000 of the state’s poor, totally canceling health insurance coverage for another 70,000 people, implementing deep cuts in Medicaid, and reducing funding for state universities by 46% per student.

To balance this out, he will cut Medicaid by almost $4 billion, lay off 6,700 state employees, gut the Department of Children and Families, and cut education funding by $4.8 billion. The latter will reduce the average annual pay for teachers by $2,335.00.


Georgia: Although Georgia already has the 49th lowest tax burden per capita in the country, Governor Nathan Deal and Republican legislators propose to cut corporate taxes by 33%. Two specific beneficiaries are Gulfstream Aerospace and Delta Airlines: the former will get a sales tax exemption that will cost the state $11.8 million over two years, while the latter will get a sales tax reduction costing the state around $30 million.
To enable these corporate giveaways, Georgia has passed a budget that increases health insurance costs for state workers, teachers and retirees; it already has gutted the state’s HOPE scholarship program; it will cut funding for state universities by $75 million, and it is considering a regressive tax system that lowers taxes on the rich while raising sales taxes on basic necessities such as groceries, water and phone services.

In order to balance these, the governor will freeze school spending, cut $42 million from state university budgets, and lay off hundreds of state workers. The Republican-controlled House will make further cuts to public universities, halt most infrastructure development, and eliminate pre-school for 4-year olds.


Kansas: Governor Sam Brownback wants to eliminate the state’s corporate income tax. For the other side of this equation, Brownback and the Republican legislature are proposing a $50 million cut to education as well as a cut to the federal Earned Income Tax Credit, which would place some 6,500 new families below the poverty line.

Maine: Governor LePage wants to cut income taxes for the wealthiest one-percent, and he gave away more that $200 million in tax cuts for large estates, businesses and the rich, including a $2,700 tax cut for those earning more than $360,000/year.

To balance this, he is freezing healthcare funding for working parents, cutting money from schools and infrastructure, raising the retirement age for public workers. In his campaign, LePage promised to boost state education funding to the 55% approved by voters in 2005. As Garrett Martin of the Maine Center for Economic Policy writes, the general-purpose aid to education General Fund will be lower in 2013 than it was in 2006….[or] $137 million short of that legally mandated goal.” http://www.pressherald.com/opinion/governors-budget-too-kind-to-rich-too-harsh-on-middle-class-and-poor_2011-03-11.html

Michigan: Governor Rick Snyder is proposing cuts of more than 86% for taxes on business. This will amount to a $1.8 billion business tax break.

Offsetting this will be what amounts to a multi-pronged attack on retirees, schoolchildren, public employees and low-wage workers. Retirees face new tax on pensions and 401(k)s; low-wage workers face cuts to the Earned Income Tax Credit; and education faces a reduction in spending of up to $700 per pupil from K-12 due to a proposed $1.2 billion cut in funding for schools, universities and local governments.

While business taxes drop by 86%, individual taxes will rise by 31%, and resulting in a regressive plan whose impact on Michigan’s poorest households will be over ten (10)times greater than on the wealthiest households. So says the non-partisan Institute of Taxation and Economic Policy. http://www.americaforpurchase.com/republicans/republicans-placing-taxes-directly-on-backs-of-working-class/

Mississippi: While calling for a huge cut in his state’s corporate income tax, Governor Haley Barbour wants his Legislature to cut another $65 million in education funding beyond the $300 million already cut by his Republican legislature. He also wants to convert the state’s Medicaid program into block grants, even as Mississippi already has one of the least generous Medicaid programs in the nation. http://www.dailykos.com/story/2011/03/02/951850/-The-Biggest-Loser:-Haley-Barbour-Edition

To accomplish this, the Republican Legislature has cut education by over $300 million and Barbour is asking for another $65 million in cuts. He also wants to convert Mississippi’s Medicaid program, already among the least generous in the nation, into block grants that the state would then control. Finally, we have Barbour’s hypocritical entitlement of using the state plane for non-governmental use, such as personal fundraising, football games and boxing matches. http://thinkprogress.org/2010/12/27/barbour-jet/

New Jersey: Governor Chris Christie is proposing $200 million in business tax cuts, with more proposed for the next four years. These cuts would save businesses about $690 million by 2015 and, as Jarrett Renshaw writes, “solidify his [Christie’s] image as a fiscal conservative.” http://www.nj.com/news/index.ssf/2011/02/gov_christies_budget_to_includ.html One questions such fiscal conservatism, given the fact that one of his bills will result in a $250 million state revenue loss and another in a $400 million revenue loss, but then, present day Republican fiscal thinking is based on belief and ideology, not logic and reality. http://www.nj.com/news/index.ssf/2011/01/nj_assembly_passes_bill_on_res.html

Among the ways that Christie will balance out these corporate giveaways are by raising taxes on the state’s middle-class and poor by cutting the Earned Income Tax Credit, homestead rebates, mental health services, and Medicaid. He also is withholding property tax rebates and, as we all know, has proposed cuts to New Jersey schools, which Superior Court Judge Peter Doyne has ruled against, noting that the State has a “constitutionally mandated obligation to educate our children….[and] it is clear the State has failed to carry its burden.” Let’s also not forget that Christie passed up Federal money and a golden opportunity to create more jobs when he killed that major transit project for a new transit tunnel under the Hudson River.

Ohio: Governor John Kasich is planning tax cuts for oil companies (as if they needed any) and other corporations, a repeal of the estate tax, and an income tax cut for the rich. If, instead of this latter cut, Kasich was to restore the income tax rate of 7.5% on those making over $200,000 and create a new 8.5% rate for those making over $500,000, he would generate $950 million a year for Ohio. Kasich also wants to privatize some long-standing and symbolic state operations, such as the Ohio Turnpike and the state’s liquor distribution operation. He wants to lease this latter operation to JobsOhio, a private economic development corporation that he, himself, has created.

To balance off all this, Kasich is cutting 25% of the budget for schools and proposes to cut $1 million from food banks, $12 million from children’s hospitals, and $15.9 million from an adoption program for children with special needs. In similar fashion to Christie in New Jersey, Kasich killed Ohio’s high speed rail project, in which federal money would have created many needed jobs. None of these onerous, belt-tightening projects seemed to dampen his inaugural celebrations, the price of which was $1.15 million.

Pennsylvania: Governor Tom Corbett has proposed $171.1 million in business tax credits and is also proposing to phase-out the Capital Stock and Franchise Tax, which will save businesses $70 million. His corporate tax breaks will be worth between $200 million and $833 million, depending upon which estimate one uses (the latter, from the Center on Budget and Policy Priorities, is likely more accurate).

Having buckled under Tea Party pressure to issue a no-tax pledge, he also will oppose any tax on natural gas drilling (aka, fracking), thus giving this industry a windfall as it destroys the environment with its invasive and polluting processes and making Pennsylvania the only major gas-producing state to not tax fracking.

To balance these giveaways, Corbett will freeze teachers’ salaries, make cuts in Medicaid, and cut $1 billion in funding for education. These education cuts also will affect students from poorer districts ten times harder than it will students from wealthier districts.

South Carolina: Even if on a smaller and possibly less egregious level, Governor Nikki Haley is seeking to entirely eliminate the state’s corporate income tax while cutting education funding and Medicaid along with forcing state employees to pay more for their benefits.

Wisconsin: Governor Scott Walker has given away $140 million in corporate tax cuts, even though these cuts already have worsened the state’s fiscal condition. http://thinkprogress.org/2011/03/16/gop-state-corporate-tax-cuts/   Then on January 31, he signed a bill that enables companies relocating in the state to avoid any corporate tax payments for two years. While campaigning, he also had proposed additional tax breaks that included reducing taxes on employers and repealing the “combined reporting” requirement for business taxes, a measure that had increased tax revenues and was approved in 2009.

Offsetting this, besides his now infamous push to strip away collective bargaining rights from public workers, are plans to eliminate $26 million in tax credits for seniors, single mothers and cancel property tax rebates for low-income Wisconsinites who make less than $24,000 a year. He also plans to dismantle his state’s Medicaid system. State workers will now pay more for their pensions and health insurance, and thus lose take-home pay.

*For those who wish to look into some of these examples on your own, here are the urls for two general sources: http://thinkprogress.org/2011/03/16/gop-state-corporate-tax-cuts/ and http://www.americaforpurchase.com/republicans/republicans-placing-taxes-directly-on-backs-of-working-class/

« Government Shutdown and the Game of Chicken
Whose History Is This? »