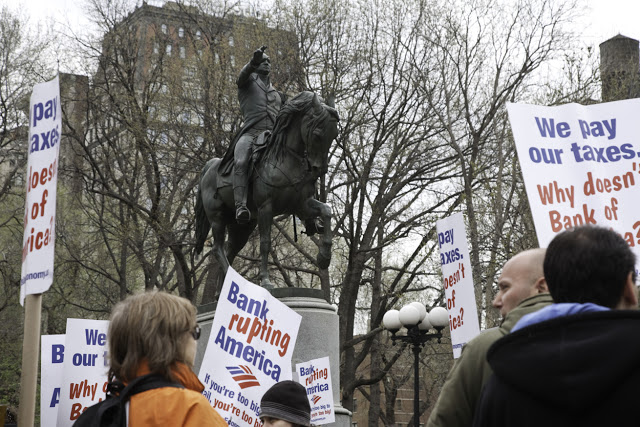 On Friday, April 15, New Yorkers and other citizens gathered at Union Square in a protest called “Sounds of Resistance” (because it featured musical groups as well as speakers). The protesters voiced three main demands: that corporations pay their fair share in taxes, that home foreclosures stop immediately, and that our “too big to fail” banks break up.

Union Square, first designated as a public commons in 1815, became a place of social and political activism by the mid-century. This equestrian statue of George Washington presides over its south end; it was dedicated in 1856 and was the first public sculpture erected in New York since one of George III, almost ninety years earlier. I find it ironic that the Father of our Country must watch over his 21st-century descendants as they struggle for equality against a wealthy, selfish and unsympathetic elite–qualities not unlike those of the 18th-century British Crown which our Revolutionaries fought. The irony thickens when we recall that Washington, in his Farewell Address, made reference to the necessity of paying taxes and called for all Americans to reject partisanship and serve the common good.

Some of you may ask why all of the protest posters seen above focus on the Bank of America? The answer is that, in terms of its assets, it is the largest bank in the U.S. and, conveniently, it has a branch at the south-west corner of Union Square (which you will see in two later photographs that I took on Friday). Then, also, Bank of America and our other largest banks operate today in a way radically different from when I was a youngster in the 1950s. Back then, we were brought up to understand that banks and bankers were among the most respected, cautious, law-abiding and trustworthy of institutions and professionals. 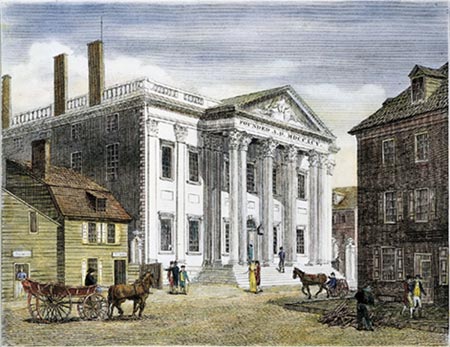 These qualities of caution and trust were instilled in our very first banks (and reinforced after the Depression with the FDIC). Shown above is a perspective drawing of the First Bank of the United States (in Philadelphia), chartered in 1791 by Congress and signed by George Washington. Among the nonnegotiable conditions for its establishment was that it could neither issue notes nor incur debts beyond its actual capitalization.

This, of course, is a far cry from today’s banks. Bank of America, for example, was caught hiding $5.8 billion in bonuses from shareholders as part of its takeover of Merrill Lynch. Bank of America also has repeatedly disregarded the law requiring that it provide legally valid documents to back up its claims in completing foreclosures, in what has been termed the “robo-signing crisis.” Then, again, Bank of America has added new “membership fees” for its credit cards, violating the spirit of the Credit Card Act of 2009. This is not the sort of behavior we, or at least I, expect from the venerable institution of banking.

Naturally, Bank of America is not the only perpetrator of such behavior. Other major banks have hidden billions in liabilities from investors, defrauded investors of junk mortgages, failed to disclose millions in compensation, passed illegal tips and participated in insider trading, among many other such egregious and “unbankerly” actions. Because Congress (particularly its Republicans) have been extracting the teeth from regulatory commissions for at least three decades, neither the FDIC, the OCC, the CFTC or the SEC has any prosecutorial power and it’s common for high-ranking SEC officials to go on to lucrative jobs with Wall Street banks, as Matt Taibbi reveals in a Rolling Stone article. 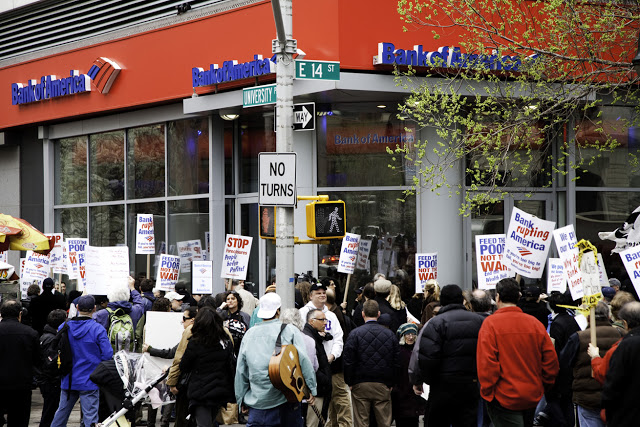 So, here we see the Union Square protesters crossing 14th Street on Friday to picket a local branch of Bank of America, carrying signs that read “Bank rupting America,” “Stop Foreclosures: People before Profits,” “Feed the Poor, Not the War,” and “We Pay Our Taxes; Why Doesn’t Bank of America?”

Since Friday, April 15, is traditionally our tax day, this latter protest sign carried particular relevance. This year, for the second year in a row, Bank of America paid no federal corporate income taxes. It used its losses to avoid paying taxes, even though it reported a tax benefit of almost a billion dollars. As the American worker and its middle class find themselves besieged by state governors intent upon taking away their rights as citizens; as they see large corporations undermining the power of their vote and banks squeezing the last bits of life out of their mortgages and credit card accounts, it’s no wonder we are entertaining such demonstrations around our country.


Our largest banks constitute the main cause of our financial distress today. As Chris Hedges writes, “The banks and Wall Street, which have erected the corporate state to serve their interests at our expense, caused the financial crisis. The bankers and their lobbyists crafted tax havens that account for up to $1 trillion in tax revenue lost every decade. They rewrote tax laws so the nation’s most profitable corporations, including Bank of America, could avoid paying any federal taxes. They engaged in massive fraud and deception that wiped out an estimated $40 trillion in global wealth. The banks are the ones that should be made to pay for the financial collapse.”

Allow me to end on a more personal note. While most of the protesting crowd was still gathering in Union Square, listening to the speeches and the music, these two citizens stood as the advance guard in front of the local Bank of America branch. They are Patty and Bill, and Patty had come down from Massachusetts for this event. I sent Patty this photograph and gave her the opportunity to tell me why she came all the way down to New York. She offered two reasons, the first quite personal and touching, the second broadly political and rather unsettling because of its historical implications.

On a personal level, Patty wrote: “The reason I came all the way down to NYC is because showing up at demonstrations is putting my body where my mouth is, so to speak. I am a massage therapist and I believe the physicality of showing up creates a prayer in motion.”

Thank you, Patty, for bringing the energy of your prayer to me and to New York this past Friday.

« Cry for the Lost Democrat
The Bipartisan March to Fiscal Madness »