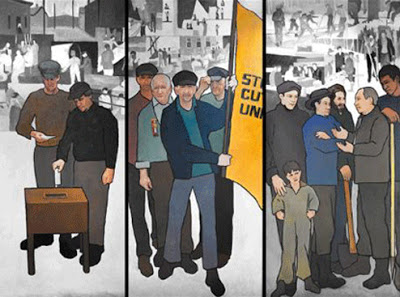 The Portland Museum of Art is hosting a public forum today and calling it “Whose Art Is It?” The reference is to the thirty-six foot wide mural painted by artist Judy Taylor in 2008 for the Department of Labor building in Portland, three panels of which are depicted above.

The works are representational, each panel a vertical oblong in which the background provides enough detail to identify the setting and context, but is painted in grisaille so as not to conflict with the main protagonists in the foreground, which are more simplified and painted in color.


The mural, eleven panels in all, is titled The History of Maine Labor, and the artist consulted with historian Charles Scontras about which events to represent. Among these are the first state Labor Day of 1884, the inauguration of the private ballot in 1891, and the failed strike against International Paper in 1987. The figures depicted offer a cross-section of American workers: women riveters, shoemakers, and lumberjacks. At its unveiling three years ago, Maine’s Deputy Commissioner of Labor, Judy Gilbert stated that “this is going to be a very important piece…and…an accurate depiction of organized labor’s role in the history of Maine.”

So why, everyone should be asking, has the new Republican governor of Maine, Paul LePage ordered the murals removed, an act which took place in the relative quiet of last weekend? According to his spokesperson, the governor felt that the murals “are not in keeping with with the department’s pro-business goals.” But this is hardly an acceptable answer for such dastardly and gratuitous act.

Many more challenging subjects of public art–suicides, massacres of the Innocents, rapes of the Sabines–have survived the test of time for centuries, even millennia.  Certainly Governor LePage isn’t so thin-skinned as to deny the laborers of his state their moment in the sun?

No businessman would have abandoned a project in Maine because of these murals, but I suspect that this act of crass philistinism is less about coddling business and more a part of a larger phenomenon among the growing population of today’s conservative Republicans. That phenomenon is a broad-based rewriting of the history of our country to serve a narrow, conservative ideology.


This phenomenon of rewriting history is maybe best remembered by the Texas history book re-write that took place around this time last year. In mid-March of 2010, the Texas Board of Education approved a social studies curriculum that, literally, would alter history and economics textbooks for the entire country. Texas can do this because its size allows it to command the textbook market. What Texas demands, publishers supply for schools throughout the country (except for California, which is large enough to have managed a ban on these new Texas revisions).

Among the hundreds of historical revisions issuing from Texas will be the replacing of Thomas Jefferson as a great thinker of the Enlightenment (by John Calvin);  the teaching of the Judaeo-Christian influences on our Founding Fathers, but not the importance of the separation of church and state;  the naming of our government as a “constitutional republic” rather than “democratic;”  the deemphasizing of the fact that the Constitution prevents the government from promoting one religion over others;  the partial whitewashing of McCarthyism by suggesting that Joe McCarthy’s hearings were justified;  and the addition of a section on conservative resurgence of the 1980s with figures like Phyllis Schlafly, the Heritage Foundation, and the NRA.

As Board Member Cynthia Dunbar, an evangelical lawyer who was elected on the board for her religious views, stated, “In Texas we have certain statutory obligations to promote patriotism and to promote the free enterprise system. There seems to have been a move away from a patriotic ideology. There seems to be a denial that this was a nation founded under God. We had to go back and make some corrections.”


This, however, is not how real history is written and becomes broadly accepted. This is propaganda masquerading as history. It is a misdirected (and in some cases cynical) attempt to mold the world, not as it really is, but as one would prefer it to be. It is a part of what is known as the “big lie,” and if enough young students (from Texas and other states) read this revised history, it may indeed become their truth.

A more liberal Texas Board of Education member, Mary Helen Berlanga, who is an attorney in Corpus Christi, complained in vain that other members of the Board “are going overboard, they are not experts, they are not historians….they are rewriting history, not only of Texas but of the United States and the world.” In this way, a grass-roots, school board lie can spread from Texas across our country, like Kudzu.

James McKinley covered this topic for the New York Times on March 12, 2010 and opened his article with these words: “The Texas Board of Education on Friday approved a social studies curriculum that will put a conservative stamp on history and economics textbooks stressing the superiority of American capitalism, questioning the Founding Fathers’ commitment to a purely secular government and presenting Republican political philosophies in a more positive light.”

So, one may ask, how do two incidents, one in Texas that clearly is a concerted effort on the part of a conservative board to rewrite history, and another that simply may be the thoughtless overreaching of a confused conservative governor, constitute a broadly-based phenomenon? What connects them?

There is no “smoking gun,” no convenient memo from Karl Rove, for example, admonishing Republicans everywhere to use his enclosed history talking points whenever possible. But we do have innumerable examples in the past decade of Republicans who either do not know their American history or are playing loose with historical facts for some ulterior motive. This, in itself, is astonishing and frightening.

Allow me just three examples from among literally hundreds. Former House Majority Leader Dick Armey (R, TX), in attempting to cast socialism in a bad light (as Republicans always want to do), claimed that the Jamestown settlement was doomed because they were socialists: “Jamestown colony, when it was first founded as a socialist venture, dang near failed with everybody dead and dying in the snow.” Actually, the Jamestown settlement of 1607 was a capitalist venture financed by the Virginia Company of London. What we have here is a former economics professor falsifying history to make it conform to contemporary conservative ideology in his talk to the National Press Club on March 15, 2010.

Another example, where more recent historical events are subjected to a Republican make-over, reveals several members of the Republican party suffering from ideologically-induced amnesia in regard to the September 11th attacks on our country. Rudy Giuliani told George Stephanopoulos of Good Morning America that “We had no domestic attacks under Bush. We’ve had one under Obama.” Even had he meant “after 9/11,” he still was wrong, as we also had the anthrax attacks, Richard Reid’s failed shoe bomb attempt, and the 2003 Beltway sniper attacks, all of which were terrorist acts under George Bush. But Giuliani wasn’t alone. Dana Perino, Bush’s last White House Press Secretary claimed in an interview, “We did not have a terrorist attack on the country during President Bush’s term.” Then, Republican strategist Mary Matalin said that Bush “inherited the September 11th attacks” from President Clinton. Maybe if enough Republicans say this, we will forget that the Clinton Administration was warning the new Bush Administration about suspected Al-Qaeda plots on our country beginning with a memo of January 25, 2001.

There are, of course, many, many more examples of such conscious manipulations of historical fact, of distorting history for ideological purposes, among today’s conservative Republicans. Among these, some examples may be less intentional and stem simply from a lack of respect for history, and still others may derive from simple ignorance.

I would place Michele Bachmann (R, MN) in this latter category. What are we to do with an elected Representative who consistently falsifies or garbles history? One could fill an entire blog post of this length with her historical misstatements, but I will offer just two. In the first, Bachmann is so enamored of our founding fathers that she feels compelled to remake them in the image she desires, and so she told Iowans on January this year that the “very founders that wrote those documents worked tirelessly until slavery was no more in the United States.” That Jefferson, Washington and many others owned slaves is an inconvenient truth for our representative from Minnesota. And then, less than a month ago, while addressing New Hampshire Republicans at a Manchester fundraiser, she gushed, “You’re the state where the shot was heard around the world in Lexington and Concord.” 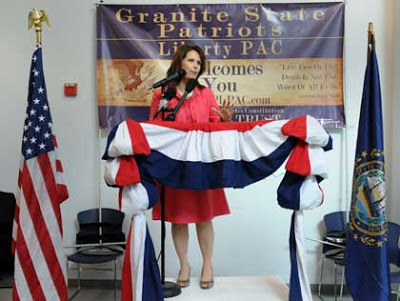 May we let your third-grader correct this Bachmann statement?  Meanwhile I’ll try hard not to weep for my country (as my tears may destroy my keyboard) and conclude this post as follows:
I’m not sure why our conservative Republican citizens are so intent on re-writing and distorting our shared history, but rather than learning from history, they seem to want to create it. In doing so, they ignore the reality of the past and are much more likely to repeat and relive its miseries. Although these Republicans are not totalitarians (not yet, anyway) their behavior does bring to mind George Orwell’s observation that “from the totalitarian point of view history is something to be created rather than learned.” (1946, “The Prevention of Literature”)

Please, let’s all try to embrace the real history that we share.  It belongs to all of us!

« America and the Corporate Dragon
Cry for the Lost Democrat »