In today’s New York Times’ Op-Ed Section, Helene Cooper and Jennifer Steinhauer wrote an article titled, “Obama Offers Jobs Bill, and the G.O.P. Balks,” to which most of us would respond, “and so, what else is new?”Doing what they do so well, which is to invoke the specter of fear of anything the opposition offers, one House Republican staff member sent out an email with the subject line, “Beware the Tax Man.” And then House Majority Leader Eric Cantor (R, VA), always ready with a monkey wrench to toss into the works, warned that no Republicans would support Obama’s bill if it involved any tax increases and then proceeded to wrap himself (once again) in the cloak of “the American people.”

Speaker John Boehner (R, OH) quickly added that Obama’s proposal “doesn’t appear to have been offered in…bipartisan spirit.”  This bit of willful insanity, of course, disregards the fact that for the past two years Obama has bent over backwards to try to bring bipartisanship to the fore, only to be rebuffed by the opposition party every time. In fact, I imagine that the image much of the country shares in this regard is that of Charlie Brown [Obama] once more trusting Lucy [Republican, any/all] to actually continue to hold the football so he can kick a field goal. 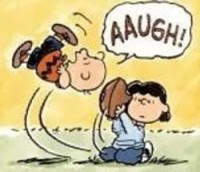 In a wonderful bit of irony, the Republicans–today’s version maybe being the most inflexible group of politicians our country has ever witnessed–are accusing President Obama of being too inflexible, according to Cooper and Steinhauer.

This is what we have come to expect of today’s Republicans: when presented with a reasonable solution by their opposition and unwilling to admit to its reasonableness, they project their own unjustifiable behavior onto the opposition. So now Obama, who has frustrated his base and most of his own party with what it sees as his naive belief in the merits of being flexible, is suddenly characterized by Republican leaders for being too inflexible!

But let’s allow this most recent attempt by President Obama to work with the opposition party for the good of the country to fully develop. President Obama still has to present the full version of his Jobs Bill and the Republicans still need to give us something more substantive than their normal, reflexive piss and vinegar.

Instead, let’s reflect on what this once grand Party of Lincoln has become. An epic topic this is, but I will restrict myself to a single example (for now), and let a Republican speak.

For 28 years, Mike Lofgren has been a dedicated Republican Congressional staffer, and for the past 16 years served both the House and the Senate Republicans on their Budget Committees. But he recently retired, as he has written, because “the pernicious ideas they [mainstream Republicans] represent…impelled me to end a nearly 30-year career as a professional staff member on Capitol Hill.”

Lofgren’s essay, publlished on September 3, 2011 and titled “Goodbye to All That: Reflections of a GOP Operative Who Left the Cult,” is truly frightening as it lays out the willful disregard for Americans, our democracy and our Constitution.

I read it with the intention of selecting a few of the most revealing quotations; but I soon gave up on this because I encountered at least one such quotation in almost every paragraph. So, instead, I simply urge you to read this essay and conclude with his last paragraph.

In it, Lofgren writes that, to the extent that “Republicans have perfected a new form of politics that is successful electorally at the same time that it unleashes major policy disasters, it means twilight both for the democratic process and America’s status as the world’s leading power.”  If you were only to read one essay on contemporary American politics, Lofgren’s is that essay.

“Goodbye to All That: Reflections of a GOP Operative Who Left the Cult” ought to be required reading for every concerned citizen of this country. God help us. The Republicans sure won’t.