On Saturday, February 4, 2012, as I was on my way to look at art in the galleries, I encountered the beginning of an anti-war gathering and march in Duffy Square (the top of Times Square), where 7th Avenue and Broadway intersect around 47th Street.  The day was officially called Day of Action–No War on Iran, and was part of “International Days of Action,” a set of demonstrations against the sanctions being imposed on Iran and the growing talk of the possibility of an (Israeli) air strike against Iranian nuclear plants. Although representatives of many organizations were in attendance, the chief organizer of this New York City protest was  The World Can’t Wait, an organization established in 2005 to repudiate the Bush administration.

After gathering in Duffy Square at 1:00 for the good part of an hour, the march headed south down Broadway, then turned east after several blocks, its goal being the headquarters of the US mission to the United Nations and the Israeli Consulate.  I stayed with the group of some 500 marchers until they turned east; then I continued on my way to Chelsea to see art shows.

Edith and Nydia, from Manhattan, are members of the Granny Peace Brigade, a group dedicated to peace, justice and human rights and with connections to several other similar women’s organizations, such as Code Pink, Gray Panthers, and The Raging Grannies.
We’ve already met Nydia (at least as seen from the back).  Here she is talking to Jacques, who is from the Bronx.  At the bottom of the sign carried by Jacques, we read “answercoalition.org.”  This is an anti-war umbrella group formed after the September 11th attacks, and its acronym stands for Act Now to Stop War and End Racism.  Brian Becker, its national coordinator, believes that in reference to Iran America has been creating an artificial crisis in order to foment regime change.  Here is an interview with Becker.
Shayan, seen here in the center, now lives in Brooklyn, but is from Iran.  His sign, “Fight the Bankers, not Iran,” is courtesy of the International Action Center, an activist group founded by Ramsey Clark that opposes any and all U.S. military intervention.  The connection between bankers and Iran is unclear, but several groups (including Ron Paul) claim that international central bankers want to regain control of the market for Iranian oil.  That is because, since early 2008, Iran quit trading its oil with U.S. dollars;  instead, it now uses the Euro and its own rial, thus creating the only market not dominated by the dollar:  the Iranian Oil Bourse, or Oil Bourse in Kish.
The Raging Grannies is an international movement which began in British Columbia in 1987, now boasting “gaggles” or chapters all over the globe.  Their stated goals are to “promote global peace, justice and social and economic equality by raising consciousness through song parodies and satire.”

The stealth drone, or more properly, the unmanned aerial vehicle (UAV), has become the weapon of choice for our fight against modern terrorist groups in foreign countries.  These scale models of drones hovering over Times Square (and Zuccotti Park when it was occupied by OWS) generate a surreal atmosphere of a looming, mechanical menace.  Significantly, Iran now has one of our surveillance drones which landed on its soil (or was downed by its forces) during an operation over western Afghanistan in late November, 2011.
All these protest signs, seen in the context of Times Square, are almost like some special form of urban camouflage, given that the exterior of most of the surrounding buildings are already covered with signs and digital billboards.  Times Square is the paradigm of the building-as-billboard, or the “Bill-Ding Board,” as American Architect Robert Venturi labelled the phenomenon in the early 1970s.  The peace demonstrators in Duffy Square are simply adding a new layer to this wonderful urban collage.
Jack, who came in from Coney Island, holds up two signs.  In his left hand, we see an ironic and contradictory sign about bombing Iran (but sparing its Persian culture).  In his right hand is a sign with references to “the third UN.”  If Jack is promoting the third UN, then he is embracing those groups neither employed by a government nor by the UN secretariat–in other words, that growing body of outsiders such as independent experts, scholars and consultants and other NGOs.  These are people whose position as outsiders allows them to be more critical and to make bolder suggestions than any insider would dare to do.  However, Jack’s affect, both in dress and in his jester-like behavior, would seem to call into question the strategic importance of that sign.  So, to me, he remains a bit of an enigma.By the way, Jack stands at the base of the statue of George M. Cohan, the man considered to be the father of American musical comedy.  Among the many popular songs of this composer, playwright and producer is Give My Regards to Broadway, which more than explains his central position in Duffy Square.  The statue was dedicated in 1959 and designed by American sculptor, Georg John Lober, who also designed the statue of Hans Christian Andersen in Central Park.
Pat, dressed in his psychedelic, painted jeans and jeans jacket, came in from Hackensack, NJ to participate in this event.  He must feel right at home among the bright neon signs of the square.
The International Socialists Organization set up a table of books and literature at the south end of Duffy Square.  Although right-wing America uses the term “socialism” as if it were the most heinous of four-letter words and promiscuously misapplies it to its democratic target-of-the-moment, the word most basically refers to the support of the production of goods for public use as opposed to private profit.  Socialism only came to be seen as a movement in opposition to capitalism in the late 19th century.Today’s International Socialist Organization is committed to stop the war in Iraq, to fight against racism, the scapegoating of immigrants, and anti-gay bigotry, and to support the broad struggle for women’s and worker’s rights:   is this really a set of goals that we want to demonize?
Cynthia, shown here on our right holding up the Ron Paul sign, lives in Brooklyn and proudly says that she represents “Artists for Ron Paul.”  Certainly, Ron Paul’s consistent stance on non-intervention and against wars of aggression and their entangling alliances, justifies his presence at this anti-war rally.  It should also be noted that, in anticipation of growing talk about Iran, Paul berated his Republican opponents in December in Iowa for wanting to follow Iraq with another “useless” war.Still, this rally has nothing to do with the ongoing Republican primary fights, and so a sign for a political candidate seems a bit out of place here, as also, some would argue, is the sign’s grand scale.
And here is one who would make this latter argument: Rosa from the Bronx.  Whenever the two handlers of the unwieldy Paul sign tried to show it off to the crowd, Rosa would stand in front of the sign in an attempt to block it from the view of the crowd.  Inadvertently, the three were partaking of a delightful piece of choreography.  Unfortunately for the Paul (sign) bearers, Rosa was both much more fashionably dressed and, given her South American background, a much better Salsa and Samba dancer.  She continued to claim her place in front of the Paul sign.The sign Rosa holds up calls for the stop of US involvement in the murdering of Iranian (nuclear) scientists.  Certainly assassination is a truly heinous crime and should be condemned.  On the other hand, it is far from clear that the United States had anything to do with the recent assassinations.  Mossad is a much more likely suspect, as is an Iranian terrorist group referred to as MEK (or MKO).
As the demonstrators left Duffy Square on its way south and east toward the United Nations, they were able to take advantage of the new pedestrian plaza that has been carved out of the Broadway car lanes.  This urban design change has created an amenity not only for New York pedestrians but also for the police, whose job stopping automobile traffic and keeping marchers safe, must now be much easier.The Broadway pedestrian plaza was begun in 2010 and offers seating areas in what was once roadway on Broadway between 47-42nd Streets and again between 35-33rd Streets.  It has facilitated a festival-like atmosphere in which the pedestrian in Times Square and Herald Square is not merely walking on a crowded sidewalk, but also sitting, reading, eating, gawking without danger of being run over, and being the flaneur, to use Baudelaire’s term for one who soaks in the art made of people on the streets of the city.

In the lower picture, Ryan (in leather jacket), who had come in from Tampa, FL, sits in the plaza just above 43rd Street eating his lunch as the demonstrators file by him.  What an introduction to the city: a front-row reviewing stand…or maybe those demonstrators become Ryan’s personal welcoming procession!

Stacey, also from Florida, came from Orlando.  However,  she has been in New York for a while and has been active in the OWS movement, even when its participants were still sleeping in Zuccotti Park [scroll back to see my previous four blogs on OWS].  Getting a decent picture of Stacey was nearly impossible, because she was continually gliding past me on her in-line skates. 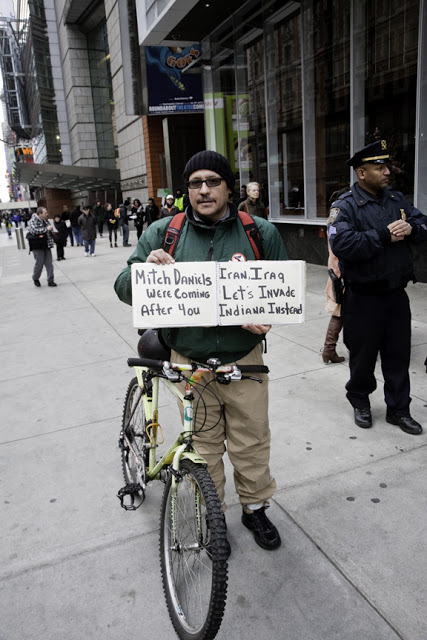 Finally, this is where I parted ways with the demonstrators, and Usabio makes an appropriate ending, because his signs take us beyond this particular event.  Usabio is a teacher from Jackson Heights, Queens, and his sign refers to the Republican Governor of Indiana, Mitch Daniels, who gave his party’s response to President Obama’s State of the Union message.As you may recall, Daniels introduced that most inane of phrases–“trickle down government” which he then pinned on Obama.  Interestingly, because of his intended derogatory implications for this phrase, Daniels may be the first Republican ever to admit, inadvertently, the complete ineffectiveness of one of his party’s cherished concepts: “the trickle-down theory,” an essential part of Reaganomics and supply-side economics.

In his response speech, Daniels than falsely blamed President Obama for our unemployment and our national debt, for dividing our nation and its peoples, for disparaging “people in business” and carrying out a “pro-poverty policy.”  He even had the chutzpah to insist that congressional Republicans were totally innocent of placing “obstacles” in the way of progress and he assured the nation that Republicans “put patriotism and national success ahead of party or ideology or any self-interest.”  Talk about psychological projection!–I know, we weren’t until I brought it up; but what a bunch of lies.

May I remind you that, before becoming Governor of Indiana, Daniels was George W. Bush’s first budget director (2001-2003).  As Ezra Klein points out, in this capacity, Daniels “oversaw the first round of tax cuts, and the initial cost estimates of the war in Iraq, and the development of the deficit-financed Medicare Prescription Drug Benefit. During his time as Bush’s budget director, the deficit increased by almost $200 billion. After he left, the policies he helped pass would add trillions more to the deficit. They are still adding to the deficit today.”  Yet, somehow, Daniels has deluded himself into thinking that this mess is all Obama’s fault.I can’t endorse Usabio’s sign calling for an invasion of Indiana, but I can understand his anger at a governor who takes absolutely no responsibility for his mistaken policies that put our country in such an economic hole, and then who turns around and blames it all on President Obama.  No, let’s not invade Indiana, but let’s be sure to keep one eye on the real threat behind our domestic problems while we keep our other eye on an equally threatening set of international issues.

« The Super Bowl, Star Spangled Singers, and Sulphuric Politics
NHL Reflections With a Nod to the NRA and Faust »