Many of us, by now, most likely are aware of the fact that several prominent corporations have broken their ties with ALEC, the American Legislative Exchange Council.   Among these corporations are Coca-Cola,  PepsiCo,  Kraft Foods,  Mars, Inc., McDonald’s,  Wendy’s,  Reed-Elsevier, and Intuit, Inc.

In light of these corporations having gone public in dropping their memberships, ALEC Executive Director, Ron Scheberle, issued a statement on April 11, 2012.  In it, he complained that “we find ourselves the focus of a well-funded, expertly coordinated intimidation campaign.”  He then proceeded to whitewash ALEC, calling it an organization dedicated more to “solutions than rhetoric,” transparency, job creation, fair tax policies, and open discourse.   Scheberle also gave assurances that ALEC “will not be defined by ideological special interests.”

Now, if ALEC truly operates under these principles outlined by Scheberle, it is hard to comprehend why major corporations would be abandoning it like rats from a sinking ship.  Who can argue with such altruistic and positive principles?   But then, as we look more closely at the work of ALEC, we find that its actions not only speak much louder than its words, but also speak an entirely different, contradictory language.

ALEC brings together corporations and conservative state legislators.  Then, with the input of the former [corporations], it writes legislation that it gives to the latter [state legislators] to enact.  Over 1,000 pieces of legislation are introduced by ALEC during each legislative cycle, and close to 20% of these actually become law.   In other words, hundreds of elected representatives (almost all Republican) submit legislation that they did not write. Were their Statehouses academic institutions, they all would be expelled for plagiarism.  Unfortunately, the bar is much lower for our elected representatives than it was for those same repre-sentatives when they had attended college.

Still, were they bringing decent legislation back to their respective states, and thus working in the best interests of their constituencies, one might be able to forgive them their sloth. Alas, the legislation they would bring home was mainly written by and for the international, corporate members of ALEC, not for the constituents of their specific state.   In this lies the real tragedy of contemporary, American legislative democracy.

This is what ALEC does. In other words, ALEC is the secretive, behind-the-scenes source of most of the social and political disruption and angst that we have been experiencing in America: the emergency managers in Michigan, the union busting in Wisconsin, the ultrasound legislation in Virginia, the immigrant detaining and deporting in Arizona, the blocking of voter registration in Florida. One could extend this list, state-after-state; but I think you get the picture.

So, if we return to examine the statement of ALEC’s Ron Scheberle, we begin to understand that ALEC is anything but transparent.  Who knew that all that insane legislation being pushed through one Republican-dominated statehouse after another, particularly since the 2010 election, actually came from a single source?  This legislation, all written in ALEC-organized task forces, has destroyed jobs, not created them, as Scheberle wrote. It has supported tax policies for large corporations and the ultra rich and not promoted “fair tax policies.”  Because ALEC members are conservative and almost exclusively Republican, it is abundantly clear that ALEC, indeed, serves the “special interests” of a specific ideology. Scheberle’s whitewash, as I called it, is simply that: words meant to counter any anticipated criticisms and paint a picture the opposite of reality.

Marvin Meadors’ Huffington Post article, “How Are ALEC Laws Undermining Our Democracy?,” calls ALEC a “bill churning mill” and suggests that it “bears a striking resemblance to the evil law firm in the film The Devil’s Advocate.”  If we accept his metaphor, I imagine the movie’s boss, played by Al Pacino (who turns out to be Lucifer) would have to be ALEC’s founder, Paul Weyrich (also co-founder of the Heritage Foundation). Weyrich once candidly acknowledged, “we are radicals, working to overturn the present power structure of this country.” And on voting, the lynchpin of our democracy, Weyrich said, “I don’t want everybody to vote….our leverage in the elections quite candidly goes up as the voting populace goes down.”  Obviously, democracy and fairness were not Weyrich’s goals; nor are they the goals of ALEC today, given that it has been instrumental in passing voter-ID laws among thirty-two states with the intention of suppressing non-Republican votes.

If Weyrich is John Milton (Al Pacino) in The Devil’s Advocate, I would offer a different film metaphor for Ron Scheberle and today’s ALEC: The Wizard of Oz.  The corporations might be the Winkie Guards, enslaved by the Wicked Witch of the West until freed at her death. 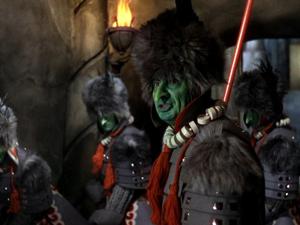 I’d like to think that the head Guard, crying with joy at his new-found freedom, might be the Robert Gates Foundation, now that it severed its connection to ALEC. 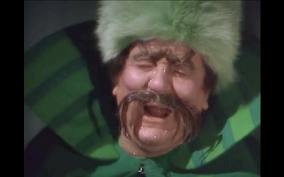 The flying monkeys, who are described as “intelligent enough to obey commands” become the state legislators, 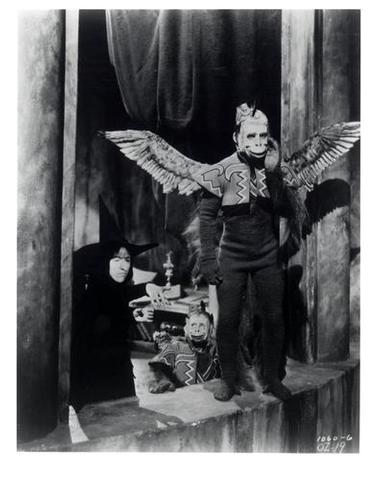 and we can imagine the sky blackened with them, not as they pursue Dorothy, but as they fly back to their statehouses armed with new, evil legislation.

Ron Scheberle, as ALEC’s Executive Director, would then be the Wicked Witch of the West. 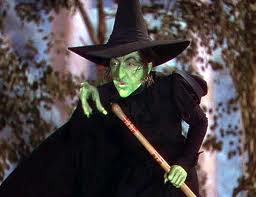 And when Dorothy (The Center for Media and Democracy, The Color of Change, Daily Kos: take your pick) accidentally throws a little water on her, her final words could also be those of Scheberle with hardly any word changes:

“Ahhhh, you cursed brat, look what you’ve done! I’m melting, melting.    Ooooh what a world, what a world.   Who would have thought that some little girl like you could destroy my beautiful wickedness.   Ooooh, no.   I’m going…..”

« Marching with Hoodies: a commitment to community and life
This Side of Paradise and Whitney Biennial Art Shows »