In the wake of the Stonewall Riots of June 28, 1969, when police raided the Stonewall Inn in Greenwich Village, the homosexual community has unified to fight for its civil rights. One of the outcomes of this event has been the Gay Pride Parade, the first of which took place in June of 1970 as a civil rights demonstration. Over the years it has grown less confrontational and challenging and much more celebratory, and this year it was particularly celebratory because of the recent passage of the Same Sex Marriage Equality Bill.

Just imagine someone walking down the middle of Fifth Avenue passing out posters promoting the freedom to marry: 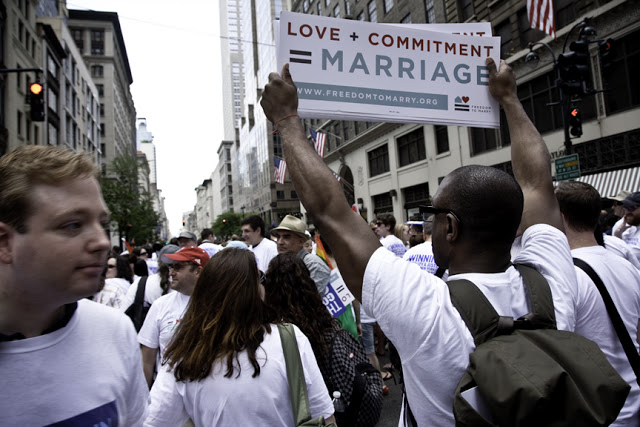 Or, given the often antagonistic relationship between New Yorkers and the State of New York governors, historically, just imagine hundreds of people walking down that same avenue while holding aloft signs thanking Governor Cuomo:

This was truly a wonderful celebration, and I almost regretted not staying for the parade itself.  However, whenever I am in the City on this weekend, my preference is not to find a good vantage point from which to watch the parade, but to wander the cross streets between Madison and Sixth Avenues an hour-and-a-half before it begins to photograph some of the participants as they get ready.

This year, because of unusually restrictive access to those streets for whatever reason, I managed to get many fewer shots of the individuals, particularly the drag queens (and kings) and their marvellous costumes. It was obvious that even they were having difficulty getting access to the cross streets, and some had to get ready right on Sixth Avenue, with all of its traffic.

Others had to take detours of several blocks to get to their assigned gathering point.

Nevertheless, little could dampen the high spirits, and it was a beautiful, sunny day.

Below are more photographs of this Sunday morning which, I hope,  capture some of the raucous and festive mood of this event. 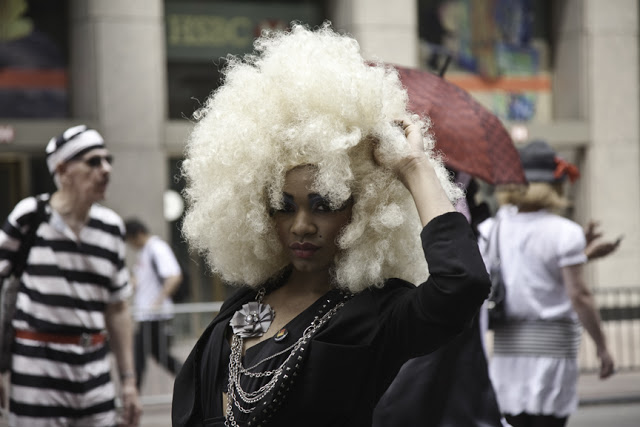 I discovered that an astounding 274 organizations were participating in this Parade, and even if most of my photographs captured individuals, below are a very few shots of some of those organizations:

Maybe next year I’ll photograph the preparations as I usually do, but then make my way down to Greenwich Village to watch the parade as it ends its route.

This year would have been a good one to actually watch the parade, as John Leland of the New York Times reported, Governor Cuomo “was the parade’s rock star, eliciting shrieks as he made his way down Fifth Avenue.”

Leland also noted that “several people carried hand-lettered signs thanking by name the four Republican senators who voted for the [Same Sex Marriage Equality] bill.”  Given this rare bit of bipartisan spirit, what are the chances of getting Dick Cheney and his gay daughter to participate in the parade next year?